Skip to content
I’ve been plagued with gophers this summer, like every other summer here at Happy House Farm.  Usually I employ a gopher getter who traps for me $10 a gopher or mole.  I think it’s a great deal, but at the start of summer he had carpal tunnel surgery, so I was left to fend for myself.
At the beauty salon when I was bemoaning my gopher hole-decorated lawn and garden, another patron, getting her marroon hair spiked, tipped me off to a device called a Molecat that whacks the little buggers in the head so they die of a concussion.  She had dispatched 26 moles with it the summer before.  She told me where to buy one and I bought one.  I set it up and waited.  I waited a long time.  Nothing seemed to have happened.  Finally, when I was done waiting, I removed the Molecat from the hole and a horrid stench somewhat like dead skunk followed.  I guess something happened down there in that hole after all.
In the meantime, I wrote to my sister of my Molecatting experience, once again griping of my lawn and garden full of holes and hills.  I received a card in the mail from Gopher Contracting Services.  On the front were six dancing gophers.  When I opened it, they giggled and sang, “Have a dee-da-dee-da-doe-doe day!”  They wrote, “Have a carrot crunching, beet munching, radish slurping, plant burping, happy-dappy, eating your garden day!  The address they used was my sister’s, so I wrote back to warn her that the gophers had stolen her identity.  If there’s one thing I won’t tolerate, it’s gopher fraud.
“Dear Sister:
This is to inform you that your home address has been hacked.  “Gopher Contract Services” just sent me a musical card using your address.  If you hear knocking, do not open your door, especially if you see no one when you look out the glass at the top of the door.  The little shits will probably bite your toes off before you know what hit you.
I’m told my gopher hit man is back in business and their day is coming.  I am looking up gopher stew recipes this very moment on the internet.  This former Brownie/Girl Scout is going to be prepared.”
Not too much later, I received her response via e-mail:
“Dear Sister: ~
I have neither been a Brownie or a Girl Scout ~ so I had a very sleepless night wondering what I was going to do should I hear that fateful knock on my door.  I do so love my toes, even though they are gnarly and crooked.
Then suddenly, as luck would have it, I had an epiphany in the middle of the night and took action first thing this morning.
Knowing Elmer specializes in only in pesky rabbits, I researched on the internet and found that his cousin, Gutt Fudd, focuses mainly on giggly gophers.  I gave this “well preserved” gopher grabber a call.
Thankfully, he was literally at my door waiting for me when I got home from work.  He assures me he will be ever vigilant, right outside my door, until “Gopher Contract Services” has been extinguished for good.
Thank you so much for the warning!  I have enclosed two pictures of Gutt, so you too can be assured that I am safe.
Love as always!”
I have attached one of the photos so you can see Elmer Fudd’s brother, Gutt.  I’m reassured that my sister is well-protected, at least from the gophers.  I don’t know who will protect her from Gutt. 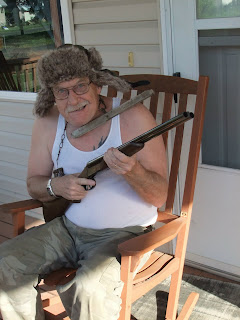 I have re-set the Molecat and stuck it in the middle of a line of holes that runs up my front sidewalk every summer.  I am waiting.  Nothing seems to have happened but I’m almost done waiting.  Just in case the Molecat’s whack of death has worked, I have a clothespin for my nose.  Just in case it hasn’t worked, I have my gopher getter on speed dial.  Tomorrow, I’m giving him a call.
Miss Emma pads after me from room to room on her soft white feet, regarding everything I do, each aspect of daily routine—dishes, laundry, meal preparation—sometimes napping while I write or pay bills.  She scampers after invisible mice up over the top of the sofa and back down while I cook dinner, yelling her throat yippee.
Would you say females are the same in every species?  That would explain why she is most attentive when I arrange my hair and apply makeup, intent on memorizing each wrist action, arm motion and selection of appliance.  I include my little girlfriend by combing the top of her head as a finish to my ablutions, proclaiming, “Pretty girl!”  She likes me to say this, I think, hunching her back, pleased.  “Look at pretty Emma,” I invite, picking her up, holding her face toward the mirror.  She adopts an attitude of insouciance as only cats can do, gazing everywhere but the mirror.
Yet, when I am busy making the bed, I notice her seated on the bathroom counter, facing the mirror, assuring herself, “Pretty Emma!  Pretty Emma Kitty!”